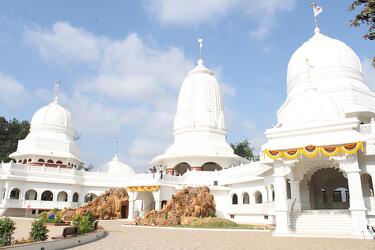 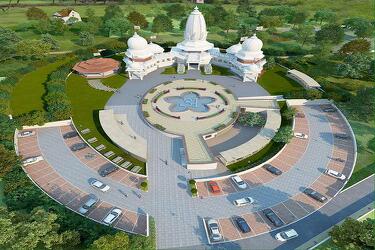 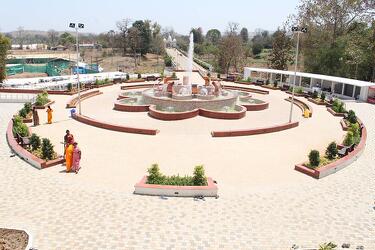 This Ashram is the nearest and the most approachable from Mumbai. Situated near the dense forests of Gujarat at the bank of river Choti Cauvery, it is quite close to this beautiful Hill station – Saputara.

Yogiraj Maharshi Sadguru Sadafal Deo Ji Maharaj, who revived the knowledge of Brahmavidya after hundreds of years, and established Vihangam Yoga, visited the Kabir-Vat near this place in the year 1944. He was then requested by his disciples to visit Dandakvan. There, he met Shri Shardul Singh Solanki, an influential person from the erstwhile princely state of Vansda. Shri Solanki ji did his best for the spread of Vihangam Yoga in Gujarat. It was at his behest that the Raja of Vansda donated this land for the ashram.

“This Dandakvan Ashram is the Sadguru’s abode. Its importance is immeasurable. Those men and women who pine for God, when they come here, in this Dandakvan, when they behold this ultimate holy place or stay here, they will be entitled to Bhakti (devotion) and Mukti (liberation).”

The heat of Surat makes it hard to believe that a forest is nearby. When you are out to explore new places, even on a pilgrimage, it is always advisable to carry a guide map. A trip to Dandakvan is special because it’s a special place, and visits to special places make the occasion special as well. This is not just another forest that one can visit to enjoy the greenery and wildlife. For that purpose, there are many more options in the Indian sub-continent. This place is special because it’s a lot more than a forest.

Dandakvan is the most ancient forest in this part of the world. “Dandakvan” is a Sanskrit word which means, a forest that punishes the sinners. When one lands in the zone of Dandakvan, it’s hard to imagine how anyone can get punished in such a beautiful place – it’s almost like a green heaven. But Ahilya did get punished here, as she was reduced to stone form after being cursed by her husband Sage Gautam. It was only when Shri Ram’s foot brushed the stone, that she was liberated from the curse and able to regain her human form.

The Dandakvan finds mention in scriptures. Historically, it is a very significant place and the natural beauty – a culmination of the river, hills, forests and wildlife, almost has a magical effect. But what really adds to its gravity is the spirituality part.

This forest has been home to many sages and seers. Maharshi Gautam lived here and performed penance. Brahmarshi Vishwamitra visited this place along with Shri Ram. Sadguru Kabir Das lived in a place called Kabir-Vat on the banks of River Narmada. Sadguru Maharshi Sadafal Deo Ji Maharaj visited the Kabir-Vat here in the year 1944. This is the land where an ashram of Sadguru Sadafal Deo Ji Maharaj was built. This ashram that stands tall as the torchbearer of the light of the ancient science of complete knowledge and true spirituality (Brahmavidya), an ashram that has been witness to divine miracles of the Sadguru Lord.

Blessed with lush greenery and natural beauty all around, this ashram is located in tranquility near Vansda in the state of Gujarat. Surrounded by the hills and forests of the Dandakvan, the Kaveri river flows clear pretty near. There is also a lot of spiritual energy in this ashram that can be felt by anybody who meditates or even visits here. The ashram has its own history which is extremely interesting and very much realistic also.

Accommodation facility is perfect with furnished rooms. The ambiance is adorned with natural beauty, wonderful Park and a gigantic water fountain. Food is vegetarian and satvic yet pretty tasty. People at the ashram are very simple, reliable, helpful and knowledgeable.

If you want to know something or attend a Satsang, you need not worry. Vedic Yajnas are conducted here and one can attend them. It’s a great place to meditate and learn for sure. Modes of communication are phone, mobile, internet (no Wi-Fi), whereas conveyance is not an issue since town is nearby. Basically, it’s a place well-connected but still an ashram where you can experience and learn a lot, a sort of place that can help you evolve as a person and realize your goal.

Attractions In & Around the Ashram:

Jata Samadhi Mandir: In the basement of the central temple known as the Jata Samadhi Mandir, is a Samadhi of Sadguru Sadafal Deo Ji Maharaj’s nails and locks, created in the year 1953. Swamiji had taken an oath that until India was freed from British Raj, he’d not cut his nails and hair.

Prakatya Mandir: The temple on the left is known as the “Prakatya Mandir” where Nitya Anadi Sadgurudeo (Eternal Sadguru) appeared before the present Sadguru Acharya Shri Swatantra Deo Ji Maharaj.

Bamnia Bhut: Sadguru Sadafal Deo Ji Maharaj visited this place regularly from 1944 to 1954. Near this ashram is a place called Bamnia Bhut where the first statue of Sadgurudeo was erected.